Triads are groups of three people and entangled is a variation on this that brings together people from radically different backgrounds with no prior interaction but with a common purpose. This entangling leads to a more extensive and diverse exploration of the issue at hand which may lead to new ideas that can be explored. The 3 are kept together by a shared purpose and by well-crafted set of actions which ritualise the exchange of knowledge and lead to new possibilities.

For example, a child, a parent, and a teacher can be brought together to discuss their perspectives on education. They all have something to come together for; namely their perspective of education yet they also bring a different context to the conversation. This might be in contrast to 3 teachers being brought together, to discuss the same issue.

The benefits of using Entangled trios are basically:

An example would be an IT expert, an IT apprentice, and a user who has been trained to engage with IT. One is an expert in the domain, one brings a degree of (informed) naivety and the other is focused on the business or needs.

The name is a combination of entangled and trios and the idea to assemble a series of roles in new combinations which allow us to manage the entanglement to optimise the diversity. You are bringing people together in a different context rather than forcing them into mediated workshops.

The roles involved may be a combination of the following although this list is not exhaustive:

This enables us to build informal networks similar to Social network stimulation but in a much more focused way. These can also be run as part of a conference to support the formation of these informal networks.

Although no prior knowledge of the method is needed it is recommended that at least one of the participants is familiar with principles for complex facilitation that are set out in this article. In the case where you are engaging young children they can not be expected to be familiar with these concepts but being young they are likely to have open minds and not exhibit the basis that education brings. 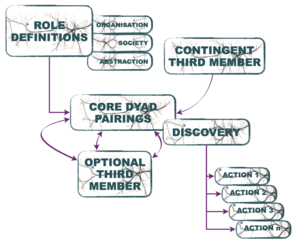 Once the preparation has been complete the basic workflow is:

Note although this is label entangled trios it is viable to start with just two people, that is a dyad and allow the third person/identity to be added during the engagement

The default is to state that it cannot be until we have developed and tested practice. If it can be run virtually then we describe it here.

Link to other articles on this wiki that are relevant.

Retrieved from ‘https://cynefin.io/index.php?title=Entangled_trios&oldid=4932’
Categories:
Cookies help us deliver our services. By using our services, you agree to our use of cookies.