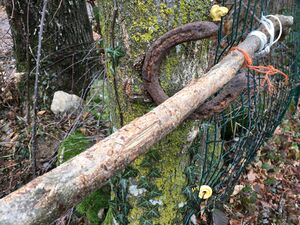 Old rusty horseshoe, repurposed to hold a wooden bar used to close a rudimental gate, in a rural area in the Italian North-Western Alps (note: bramble stem visible in the background)

Exaptation, also radical repurposing, is the taking of an idea, concept, tool, method, framework, etc., intended to address one thing, and using it to address a different thing, often in another domain.

The term "exaptation" was proposed by Stephen Jay Gould and Elisabeth Vrba in 1982. It describes a shift in the function of a trait during evolution.

The term is frequently used by (Andrews et al. 2002, Buller 2005, 84) in evolutionary psychology, whereby “exaptation” is understood as follows: “T is exaptation if and only if T is now adaptive for F, and (a) T was selected for F’ (where F and F’ are different), or (b) T is a by-product of a different adaptation T”.

Human beings appear to be quite effective in radical repurposing of things. In particular, abstraction, and the ability of observing a system from different perspectives and at different levels of granularity are key human skills here. This is usually true, though, only when adequate conditions exist, such as when the completion of a task is required under time pressure, or in the occurrence of an emergency or a crisis. By contrast, inattentional blindness can limit the individual capacity for exaptation.

The conditions for human-driven exaptation can be artificially created through the application of appropriate methods and the use of adequate tools. This is particularly useful in the pursuit of innovation. It is the case, for example, of the Exaptive triggers method.

Types of exaptation in organisations

In organisations exaptation is a process that repurposes or redesign existing resources. Three types of organisational exaptation can be found in the Field Guide for managing in complexity (and chaos) in times of crisis:

More available on the methods for the above in the exposition of the Exapt phase of managing in complexity (and chaos) in crisis.

Any training material, posters and like with links to where they can be acquired

Retrieved from ‘https://cynefin.io/index.php?title=Exaptation&oldid=5825’
Cookies help us deliver our services. By using our services, you agree to our use of cookies.