Flexuous Curves is a framework that brings together ideas such Apex Predator and Keystone theory etc ....

The cycles of development overlap. The peak of the red curve is equivalent to point 4 on the green curve, but for a different technology.

There are 6 main points outlined in the framework. These are 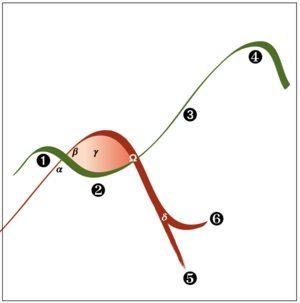 What the Flexuous curves show

One of the reasons for Moore’s Chasm [ref: crossing the chasm] is that a novel idea or product, seeking to scale, hits inertia surrounding the dominant approach.

The exit point marked as on the framework is the point of what Clayton called "competence induced failure". The dominant player does not fail because they were incompetent, but because they were too competent in the old paradigm and that very competence means the inattentional blindness is writ large into the very fabric of the organisation.

In the early days of computing, IBM radically repurposed their existing capability in the use of punch cards to give them a first-mover advantage in a new field whose full potential was yet to be disclosed. Their dominance of hardware meant they didn’t see the shift to software. This shift was made worse by the commodification of the hardware market, but IBM's market dominance meant they escaped the price pressure of competition. When failure hit it was massive: a sudden catastrophic failure. IBM recovered, and made a delta pivot by becoming a services company. They have not recovered the same position of dominance.

They had a gamma phase in which they realised that people actually wanted to buy PCs, not mainframes. Famously, they gave a team more or less total autonomy and lots of funds to create the IBM PC which, despite being functionally poor compared to its competition, dominated the space. The great irony here is that to achieve this, they sub-contracted key software development. They didn’t realise the value of the IP and thus gave birth to their successor as Apex Predator in the technology space: Microsoft. In their turn, Microsoft failed to realise that software was a commodity, Apple repurposed NeXT and the rest is history.

A general strategy to get from Alpha to Omega with an upwards trajectory is what I call a symbiotic strategy in which the novel capability is made an apparently insignificant addition aspect of convention and it is thus carried over the chasm. The strategy is positively engaged in by the host, which will benefit from the novel idea.

Same as the symbiotic strategy, where the host has little understanding or intentionality about the novel idea and how it may change their business. The novel idea takes advantage of the host to cross the chasm and gain scale of its own. The host may benefit unwittingly or could equally face a downward curve, after serving the novel idea to cross its chasm and reach critical mass.

A variation of that approach is to introduce a retro-virus, something that changes the DNA of its host.

There are lots of ways to manage the cycle. One is to take different roles by way of metaphor:

Retrieved from ‘https://cynefin.io/index.php?title=Flexuous_curves&oldid=5569’
Cookies help us deliver our services. By using our services, you agree to our use of cookies.