The word liminal comes from the Latin root limen, which means “threshold.” In anthropology, liminality is the quality of ambiguity or disorientation that occurs in the middle stage of a rite of passage, when participants no longer hold their pre-ritual status but have not yet begun the transition to the status they will hold when the rite is complete. (Wikipedia). What Turner described as betwixt and between.

It was introduced to Cynefin in 2017 and allows the suspending or holding a position related to the complex/compliance and complex/chaos transitions and avoids the necessity of introducing another domain, in effect, it adds two shadow domains while allowing the tapping of a wide body of literature. 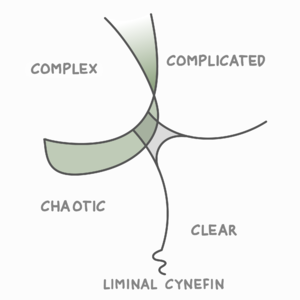 (see these as safe spaces?) Complex/complicated and complex/chaos transitions are phase shifts

There are four liminal areas that need to be considered:

The role of ritual is to allow identity to be changed - teacher to parent etc. This means that identity can be considered an emergent property of the role that you undertake in different contexts.

It also means that there is a potential for dual identity when we have not given up the previous/old one but have adopted the new/next one. This is the paradox of liminality that the old can infringe on the new or that we can be both.

Identity as an emergent property of role, through ritual and liminality

Retrieved from ‘https://cynefin.io/index.php?title=Liminality&oldid=4033’
Cookies help us deliver our services. By using our services, you agree to our use of cookies.