If we want to manage complex environments, we need to stop talking about how things should be in the distant future, and start changing things in the here and now. Move from lofty long term goals to mapping where you’re at and making small changes and monitoring what’s happening.

We decide on what direction we want to go in, map the system’s current state, run experiments to shift in that direction, measure the system's state again and assess what interventions might be most useful. This is an iterative process that incorporates feedback and allows for continually taking stock of a dynamic environment so we can take advantage of new opportunities as they arise. Hence, this is a ToC that is most suitable for complex environments.

With this approach, we talk about vectors, rather than explicit goals and end points. Hence, the name vector theory of change. A vector integrates three factors: the direction you want to move in, how quickly, and how much effort will be required. We start journeys with a sense of direction in which we want to move, we consider the intensity of effort that specific paths will take. Then speed is set by identifying available resources and natural enabling constraints to achieve the lowest energy costs to scale.

A Theory of Change (ToC) is the theoretical underpinnings of a social intervention/plan to change something. The theory can be based on experimental evidence or logic. It can refer to a collection of approaches aimed at strategic planning, description, monitoring and evaluation and learning,[1] that describe the steps needed to achieve a long term vision by considering the causal links underlying these steps. [2]

The most common approach to ToC involves visioning what you want to achieve, and then working backwards in steps outlining the actions needed to achieve the subsequent step until you reach the present moment. This is a useful approach when working within a system that could be categorised as simple or complicated within the Cynefin domains. However, this approach to ToC will not be useful when operating within a complex system given its dynamic nature.

The origins of the theory were when running a war games simulation in Singapore, using a 3D model of the battlefield. There was a need to see the big picture as well as the small changes and this need led to landscapes, although landscapes also had longer origins. This big picture became referred to as the Dispositional Landscape and represented the current state of how people are disposed to act as well as clusters of behaviour or attitudes and are shown in 2D as opposed to the 3D of the war game simulation, which confused people. These landscapes reverse the landscapes of evolutionary biologists who believe you have to climb a peak whereas a Dispositional Landscape has deep Attractor Wells which are hard to escape. The concept of these landscapes were tested with Stuart Kauffman, whose Fitness landscapes show the ability to jump between different conditions. 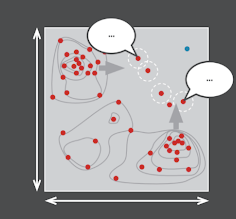 The graph represents the quantitative results of a research project. The red dots represent the quantitative data from each respondent. The blue dot represents the ideal location for data points on the graph. There are two clusters; one in the top left and one in the bottom right of the graph. The grey arrows represent the direction in which these respondents should ‘shift’ to get closer to the ideal.

If no stepping stone exists or none are close enough to the current state, Scaffolding is needed. You may want to move in a direction, but how you do it is your own affair.

After creating a Dispositional Landscape you can see the disposition of culture. It enables you to identify at multiple different layers, where there may be an issue or problem and what change is possible right now.

You need a map before you can start a journey, with a map you can understand the nature of the journey. Is it going to be a difficult uphill journey, or are the Energy Gradients with you and might a few small tweaks have a massive effect.

In the UK, when all the political parties were the same, the energy gradient and entry point for extremist views was low. If there are very shallow attractor wells it is easy to shift to an adjacent possible. These gradients also link with identity. If there is no clear identity, no strong affiliation, people will have an increased disposition to be more promiscuous.

Consider the clusters of a landscape and ask questions:

The narratives element of the naturalising sense-making approach asks the question ‘How do we create more stories like this, less like that.’ In saying ‘more like this’ or ‘less like that’ this refers to a grouping or cluster of stories not individual stories.

When making interventions to create shifts, these must done be within peoples own competency level and the decision making this drives is referred to as ‘Fractal decision making’. These decisions of ‘more like’, ‘less like’, are at an agents own fractal level of competence. You’re empowering them to come up with something that works for them, to deal with something in which they are competent, rather than something idealistic that’s been created by a limited number of people in the centre.

In empowering people to make decisions at their own level of competence, we recognise that different clusters are in fact, different, so average targets don’t work. Agents are able to go in their own direction, but the system as a whole converges at a high-level. The fractal pattern converges in a direction.

This approach was used in the Trios in the South Wales Valleys. Where the result of shifts are stories moving in the ‘right direction’ all is well. If they do not, adjustments can be made and this ability to make adjustments is what makes the shifts within a portfolio safe-to-fail. This approach towards change is a new way of using Commanders Intent or Einheit. It is error tolerant as course corrections can be made.

Distributing the decision-making - not the authority - and doing something, taking action, increases the agency of those taking the action. Traditional approaches privilege the elite few and disenfranchise the rest. Focus on how to create more stories like this, fewer like that.

This mode of change could be compared to ‘Nudge economics’[3] Nudges are small, contextual interventions that change the decision-making context, rather than offering incentives. Typically nudge theory is used by decision-makers who want to achieve a specific outcome. They use environmental changes or messaging to move citizens towards this ideal end point. With this soft paternalistic approach, citizens are really being pulled towards someone else’s preferred state with no dialogue or opportunity to voice their preference on what the desired outcome should be in the first place [4] [5] [6], not to mention how that change could be achieved.

With this approach it’s about identifying and attending to the little things that make a big difference, not the big things that don’t. Initiative fatigue is a major issue and aspirational visions of the future and outcomes based targets, as stated in Goodhart's Law and simplified by Maralyn Straham, measures cease to be useful as people game them. Another problem is explicit goals destroy intrinsic motivation.

Instead of the traditional approach, work with the small things that people understand will make a difference, within the context of their competence level and ability to actually control things. Shift away from idealistic and aspirational views of how things should be.

This approach is not..

In a single capture you get:

From this you can draw the maps at a fractal level.

After following the above steps, designing the intervention should be done by the people in the system - not a set of external analysts, consultants, or managers. When people are shown the stories, people recognise the stories and ideas for interventions come quickly.

Retrieved from ‘https://cynefin.io/index.php?title=Vector_theory_of_change&oldid=5464’
Categories:
Cookies help us deliver our services. By using our services, you agree to our use of cookies.