From Cynefin.io
(Redirected from Wardley Mapping)
Jump to navigation Jump to search

Wardley Maps (aka Value Chain Maps) offer a form of cartography to organisations. In Cynefin terms, they are both a complicated sense making framework, and a modelling method. Briefly, a map contains a chain of needs drawn from the perspective of a user, with the added dimension of Evolution. By visualising competitive landscapes, Wardley Maps can be used to improve situational awareness, develop & communicate strategy, and guide organisational design. Simon Wardley explains that what we commonly call "maps" – such as mind maps, business context views, architecture maps, etc. – are nothing like maps: the landscape is merely a canvas and positions have no meaning. With Wardley Maps, a position carries meaning making them unique and useful. 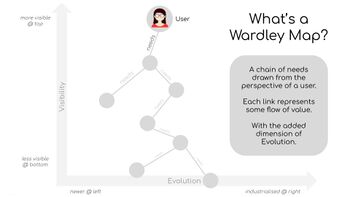 A Wardley Map is arranged on two axes. The Y-axis maps a value chain arranged by visibility to a user with aspects more important and visible to the user higher up and things of lower value or visibility lower down.

On the X-axis items are arranged based on their current evolutionary state, with more mature / evolved items on the right:

Maps are very user-centric. Capturing a map starts with the anchor: the user and their needs. Then, we map and connect the supporting value chain against the landscape of visibility and evolution. It visualises the context of the value chain to help with understanding challenges or limitations and making strategic choices accordingly.

Value chains also represent flows of value. As many organisations look to shift away from silos, maps are also a very useful way to identify and establish end-to-end value streams.

Also included within Wardley Maps are:

Wardley's Evolution is commonly confused with Cynefin's Domains, assuming the Stages of Evolution can be directly mapped onto a single domain, similar to the linear construction of Cynefin®. Eg:

While this can be useful at times, they are fundamentally different concepts and there is no one-to-one mapping. To illustrate this:

This confusion is rooted in a similarity between the two frameworks: certainty. Wardley's Evolution is a pattern of change that approximates two factors:

As components become more certain they tend to become more ordered, and that is the key link to Cynefin®. But it stops there: a component that becomes more ordered does not necessarily become more ubiquitous, and order can be represented on a Wardley Map in different ways (eg: between components at different stages of evolution). Finally, this simplified linear view of Evolution hides the complex non-linear path a component actually takes. Wardley notes that the movement towards the right on the map is generally also complex, with stabilizing practices like automation, standardization and regulation being emergent.

Thus, the evolution typologies loosely echo the domains of Cynefin® as if there’s a prevailing wind of decision style for a given Stage of Evolution that is easily overridden by other context.

One such mapping is the different types of Wardley's Practices and constraints associated with each domain:

Another mapping is derived from the “Decision Drivers” of Wardley’s Evolution Cheat Sheet:

Maps offer the concept of connected value chains against a landscape where positions and movement have meaning. Patterns also exist:

Cynefin® is non-analytical in nature, whereas Wardley Maps are created through analysis.

Wardley Maps have often been associated with the concept of Flexuous Curves, and both are dealing with strategy.

Flexuous curves are based on how an idea crosses its chasm of adoption and evolves into the mainstream, eventually rendering the incumbent offering obsolete, and potentially generating a complacency-induced failure of the incumbent suppliers.

Dave has often argued that the criteria for a strategic framework is that it can be drawn on the back of a napkin. Flexuous curves achieve this. Maps require more investment in understanding, though once people have gone over the hurdle of thinking in terms of maps and share this mental model, you can map on a napkin too. Another useful concept in Wardley Maps is the evolution and the diffusion curves.

In Wardley Maps, we need to think in terms of the two concepts:

In Wardley Maps, disruption from a new idea generally starts with a diffusion curve. An improvement offers a step-change to the market offering, beyond a simple feature iteration on the adoption curve, it is in fact starting a new curve with its new adoption cycle.

For some time, the old curve continues to progress in adoption until the new curve catches up.

The new curve needs to start from the beginning and find its customers. From the early pioneers to crossing the chasm and getting momentum. When the new curve catches up in adoption with the old curve it renders the old obsolete and takes over.

If the incumbents of the old curve have not adapted to the new product/curve, they are facing complacency induced failure by the time the new curve catches up in adoption. The old curve winds down and reaches 100% of its possible adoption. The new curve continue to progress and takes over as well as expands the market.

As an example, the mobile phone market was pretty much set with established players and Nokia's dominance. Product iterations were regular in the same format as a usual phone with design differences, some new features, etc. When Apple launched the iPhone, it was a new diffusion. The change was substantial enough that it was a new diffusion curve, which had to progress to full adoption. We know the rest, eventually the new curve overtook the old one and SmartPhone have overtaken and replaced the classic phone market, while at the same time driving a degree of adoption beyond what was the original mobile phone market.

The combination of the diffusion and the evolution covers the same space as the flexuous curves. Wardley Maps are useful in this case to dive into the details of the movement / inertia / climate supporting the crossing of the chasm and the disruption of the incumbents. 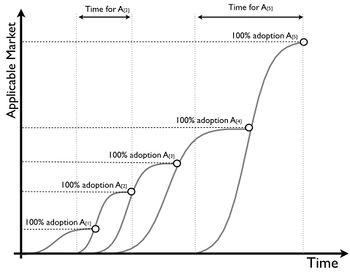 Complementary use with Cynefin®

When people map the landscape of things, such as systems, features, outcomes on the Cynefin® framework, there would be significant overlap with Wardley Maps. However it is not the best use of Cynefin® and maps may offer a better approach when mapping such "things".

When looking at making sense of a situation with a view to make decisions, Cynefin® is more adapted to capture such situations and offers more possibilities for navigating situations of complexity, chaos, confusions and ambiguity.

Wardley Maps are very adapted to map the physical / rational landscape, while Cynefin® offers a sense making approach to the cognitive landscape. As such both are highly complementary. 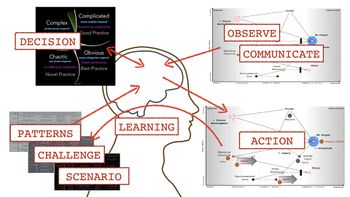 "Wardley maps offer a map of the landscape, Cynefin® supports establishing an appropriate direction to support making sense of decisions".

The intention of this section is not to explain in full details how to do a Wardley Maps (there are many links at the bottom of this section and provide such information), but to touch on an aspect directly relevant to Cynefin® such as SenseMaking the position on the maps.

When Wardley looked to find a way to inform where things should be on a map scarcity was an initial consideration. He then took the example of a gold bar, which is scarce as not many people have one. But would we say that a gold bar is something novel that can evolve further? Not so much. It is in fact quite commoditised and has been for some time, despite being rare and scarce. This led him to conclude that scarcity was not a suitable factor to gauge map positions.

He then looked at technology. Would technology be a good indicator of innovation and positions on maps? Mobile smartphones are highly sophisticated technological products. Yet, they are now rather ubiquitous, many manufacturers are producing them with comparable features and there is competition on price. This sounds more like items that are already quite commoditised. Technology by itself is not a deciding factor for positions on a map.

He then proceeded to look at publications about innovation through the centuries and noticed how the description of a novel product/service would evolve over time: 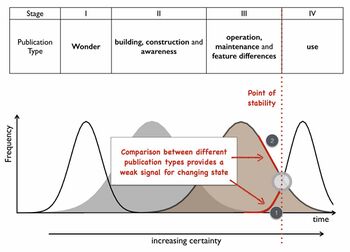 Note - It is worth noting that maps mainly happen in the known domain and making sense of position is an analytical process of matching components with the stages of evolution documented in the commonly called "cheat sheet". Some study is currently happening to consider the use of SenseMaker® with maps. One use would be to spot weak signals earlier and stronger for novel components to appear in genesis and their gaining adoption momentum to start their progress through the map. Please see figure 2 for the stages of evolution or cheat sheet. 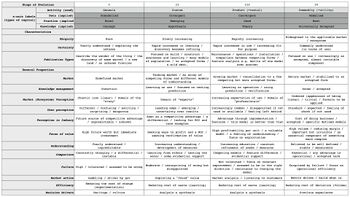 Retrieved from ‘https://cynefin.io/index.php?title=Wardley_mapping&oldid=4988’
Cookies help us deliver our services. By using our services, you agree to our use of cookies.