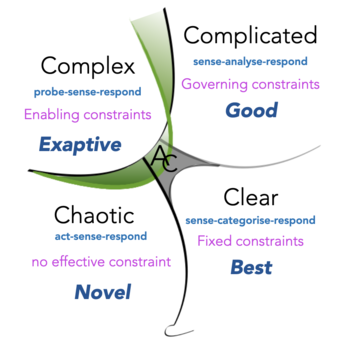 The Cynefin® Framework as at February 2021

Cynefin® is at its heart a decision support framework, not a method or model. It is based on the principle of ‘bounded applicability’; there are few if any context-free solutions, but many valid context-specific ones.

Cynefin® is Welsh for a “Place of Your Multiple Belongings,” and the pragmatic framework that bears the name emerged in the late 1990s amid efforts to help decision makers locate themselves and their unique contexts. That was locating in ways which respected that many things have value so long as we attend to the boundaries within which they are valid, and respecting that we generally do well to embrace as much diversity as we can manage without fragmenting or becoming incoherent.

Though the theory and praxis was initially rooted in the corporate worlds of knowledge management and organisational design, the framework has gone on to find favour everywhere from strategy review to crisis management and in worlds as diverse as outdoor pursuits and counter terrorism.

In 2021, the Cynefin® Framework was used as a basis for the Field guide to managing complexity (and chaos) in times of crisis. This Wiki was then developed to support those wishing to use the framework. This introduction in designed to provide pathways into the Wiki for any and all purposes.

Cynefin® is a framework for understanding what kind of problem space you are in to guide decisions-making and action. It was created by David Snowden and takes its name from the Welsh word meaning "the place of your multiple belongings."

For many, the Cynefin® Framework is embodied by a pictorial representation which, whilst it has evolved through time, can still be drawn out with a few lines on the back of a napkin. For those who know it, this can serve as a simple tool or aid to communication: a check on over-exuberance in taking a context in a particular manner, a way of getting a handle on how others are taking a context and/or a reminder of the shift in thinking that can become critical if we're to take a context one way rather than another way.

For those more accustomed to working with the Cynefin® Framework, the pictorial representation is a convenient portal into the entire field of Naturalising sense-making: a field which uses natural science as a constraint and which is dedicated to "making sense of the world so that we can act in it." For these purposes, the framework is home to dynamics and links to all manner of Methods and Assemblages (all documented on this Wiki).

This introduction focuses on why the framework exists, on the part it has played in different lives and on the value that it continues to have for decision makers (and those who support them) around the world. Further pages (linked) consider the three ages of Cynefin®, what's conveyed by the pictorial representation and how the framework can be used to support decision making. This introduction will also link into other content on the Wiki for those unfamiliar with the thinking behind the framework.

Ps. For a gentle and entertaining keynote address which is accessible and recorded to a high standard see How leaders change culture through small actions (with a partial transcription and index here. This includes a great retelling of The Children's Party Story (start at 33:33).

The First Age of Cynefin® - Formation

The primary definition of Cynefin®, is at its heart, about a flow of engagement over time with things known, unknown and unknowable, loved, and unloved all, of which entangle our lives and create meaning.

The Cynefin® Framework emerged at the close of the 1990s amid disquiet within large-corporation worlds of organisational design and information management. By 1996, originator Dave Snowden was already ready to take on big consultancies over an approach dubbed "any old method, one culture." He also recalls being particularly provoked by Ikujiro Nonaka and Hirotaka Takeuchi’s book The Knowledge-Creating Company around converting tacit knowledge into explicit knowledge and around the whole Socialization, Externalization, Combination and Internalization (SECI) approach.

Provocations from management science and approaches to business strategy led Dave Snowden to a pragmatic focus on the contexts within which approaches could be considered appropriate. The initial inspiration came from Max Boisot's I-Space framework, as presented in Knowledge Assets (1998)[1], with its focus on "abstraction" and "codification" (classic knowledge management of the time). Boisot is also credited with bringing the early focus (retained to this day) on the material difference between contexts in which cause and effect could, in principle, be predicted and contexts where no such assumption could be made.

The first reference to Cynefin® as a framework dates to Dave Snowden's Introduction to Liberating Knowledge (a CBI publication of 1999). A year late, Dave had published his Strategies for Common Sense-Making In Innovation and that presented the first iteration (and essence) of the pictorial representation we see today. That was a "back of a napkin" drawing which supported distinguishing five distinct "domains" (two ordered, one complex, one chaotic and one confused).

The Second Age of Cynefin - Transition

Cynefin® had come a long way from its origins in Knowledge Management in a relatively short period of time. The lines of the cross were now wavy and the central domain had emerged.

In his "tale that grew in the telling" contribution to Cynefin® - Weaving Sense-Making into the Fabric of Our World, Dave Snowden talks of a whole new era of collaboration around the Cynefin® Framework. Many notable individual contributions are highlighted (e.g. Peter Drucker, John Poindexter, Cynthia Kurt), but one game-changer was involvement with the Defense Advanced Research Projects Agency (DARPA) both before and after 9/11.

Once the five domain approach had been established, published works began to flow. Titles such as Complex Acts of Knowing and The New Dynamics of Strategy continue to resonate to this day. The dynamics among those developing the theory and praxis endured a few shocks, including being awarded and then deprived of a $5 million budget (2004). Looking back, Dave Snowden observed that "Cynefin simply did not fit with a research community heavily into algorithms and physics."

The Third Age of Cynefin® - Independence and Completion

Then one day on a whiteboard I drew a green line which was open at the top, it intersected disorder but closed the boundary between Chaotic and Complex. With that simple line the liminal version of Cynefin with four new sub domains was born.

In 2007, development work continued to take place through teaching at in conferences, but a key initiative began around risk assessment and horizon scanning (RAHS). This was with Peter Ho in Singapore.[2] This project led to the development of Sensemaker® for what became known as "weak signal detection" - and it meant crowd-sourcing self-interpreted micro-narratives came to centre stage.

That same year, Dave Snowden also partnered up with Mary Boone to produce "A Leader’s Framework for Decision Making."[3] This was published in the Harvard Business Review and Snowden has since described it as "The first touchstone of the third age of Cynefin®." Alongside this, the Cynefin® framework "took off" in a world of "Agile" software development, coming together with the "Agile Manifesto" in ways which have been "a rich source of ideas and practice ever since."

For the 21st Anniversary of the Cynefin® framework, Cognitive Edge ran a Cynefin21® series of retrospective webinars and published a handbook: Cynefin®: weaving sense-making into the fabric of our world. These give unsurpassed access to the life of a framework which, in its third age, developed a life of its own. 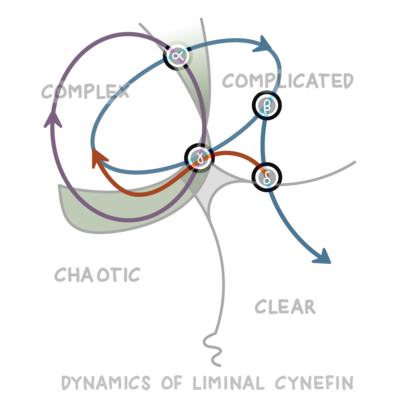 At its simplest, the Framework distinguishes order from complexity from chaos. Its most sophisticated version has five domains, four liminal areas and a host of overlays for different functions and types.

Cynefin® is at its heart a decision support framework that is based on the principle of bounded applicability of approaches within the different domains. A fundamental tenet is that there are few, if any, context-free solutions but many valid context-specific ones. As such, Cynefin® is most definitely a framework, not a method. It is a way of determining what method or approach you should adopt and, critically, when you should change it. Movement between domains can take many forms and these have been represented in the past as dynamics.

At its most basic, the Cynefin® framework allows us to distinguish between three different kinds of systems:

Most things have value, within boundaries, and Cynefin tries to establish what they are and gain an understanding of what it takes to move between domains – something which has historically been called Cynefin dynamics.

Although some people tend to take a static view of the Cynefin® domains, Cynefin® always intended to look at the dynamics of situations. One of the more famous early papers was entitled "The New Dynamics of Strategy" and [4] That focus never eased, and much of the development in Dave Snowden's thinking came from a focus on boundary states and on decision making around crossing boundaries.

A decade on from "The New Dynamics of Strategy," the introduction of Liminality to the way the Cynefin® Framework was drawn gave a whole new way of addressing Cynefin® Dynamics. Critically, it created a place to situate Complex-to-Complicated transition. As a bonus, it also shaped a space for a-shallow-dip-into-chaos and (by happy accident) paved the way for adding an Aporetic Turn (characterised by deliberate puzzlement through paradox) and a micro-domain for Competing expertise.

Virtually everything on this Wiki connects in some ways with the Cynefin® Framework. The Wiki team is developing "pathways" to help with tailored journeys through the Wiki, but in the meantime, the following are obvious starting points.

As the Cynefin® Framework has evolved, lists of organizing principles or heuristics have also changed. In 2003, thirteen heuristics were roughly grouped into four broad themes. In Cynefin® - Weaving Sense-Making into the Fabric of Our World, Sonja Blignaut reports on a new listing which frames assorted precepts in relation to three over-arching principles.

The Cynefin® Framework stands apart from, but can be used in conjunction with, SenseMaker®: an online crowd-sourcing research tool for collecting and self-interpreted micro-narratives and for discovering actionable insights beyond surveys and focus groups. It offers a science-based approach to guide collective impact and leverage the strengths of being human in uncertain times.

Overall this framework is as important to the field of naturalising sense-making as Cynefin and it is also fractal in nature, it can apply to whole markets, individual product/service strategies, or the wider movement of ideas or tropes in society as a whole.

Retrieved from ‘https://cynefin.io/index.php?title=Cynefin&oldid=5614’
Cookies help us deliver our services. By using our services, you agree to our use of cookies.