Linear causality is the simplest type of causal relationship between events, usually involving a single cause that produces a single effect or a straightforward causal chain that flows from past to future (A + B -> C). Linear causality implies a one-directional flow of causation between the micro and macro levels of a system where higher-level effects are caused solely by lower-level phenomena. According to the notion of linear causality, anything that happens within a system can be directly attributed to some previous occurrence within the same system. This implies that if you get the input right, you can define the output, or that you should be able to forecast or backcast to a future state. Forecasting predicts projects forward. Backcasting says what we would like to get and close the gaps. Linear causal thinking is related to reductionism; that is it tries to explain the whole in terms of its parts through causal laws. Assuming that every effect has a cause, and like causes have like effects, then all effects (events) must have a causal explanation, all causes reduce to efficient causes as regularities in the form of causal laws

In a complex adaptive system you cannot say: if we do x it will produce result y. Complex adaptive systems are not like recipes, cause and effect relationships do not repeat, since the context the relations are in is not the same every time. CAS and its relations are to be understood and explained in terms of dispositionality, not linear causality. An example of this in the natural world is evolution by natural selection with its unpredictable outcomes. Even if we could start with the same initial conditions, evolution would play out differently.

We can make statements on the probability of evolutionary pathways, but we cannot make linear causal statements. In complexity, mutually ontologically diverse systems or even ontologically contradictory states co-exist. The only thing we can say for certain in a complex system is that an intervention will produce unintended consequences therefore it makes sense to design interventions on that basis. A path diagram is hugely valuable as long as you realise that it is a partial abstraction and cannot represent the totality of the system in practice. It is also important to realise that even in a deeply entangled system there are some cause and effect pathways.

Learning can still be achieved in many ways and excluding more traditional and structured approaches is almost as bad as claiming those approaches are all that is needed. We also need to establish, where possible facts. One common element to all of this however is to understand the context as well as to test for coherence.

At a systems level, we have dispositions (the way in which something is placed or arranged, in relation to other things) which indicate a set of possibilities and plausibilities but a future state cannot be predicted. How things connect is more important than the nature of the things themselves; especially true when you are trying to change attitudes and beliefs. The main consequence of this is that analysis will not reveal any answer and instead, we need to shift to parallel safe-to-fail experiments. The purpose of those experiments is to allow resilience and sustainable practice to emerge. There are a number of things that be done to the dispositions of the system to affect their manifestations and there are three that seem most central: interfering, triggering, and enhancing or retarding.

The systems dispositionality and its behaviour is modulated by constraints. Those constraints can be managed and their nature understood, or our lack of knowledge acknowledged (dark constraints).

Although we discarded the notion of formal and final causes from Aristotle, we did keep the notion that nothing causes itself. But this is a bit problematic when we think of parts interacting to produce wholes which in turn constrain their part. – Alicia Juarerro

What this implies is that there are no causal laws that can give rise to evolution and adaptation in complex systems. Yet the essence of a complex system is there constraints of some type are necessary for emergence to happen. 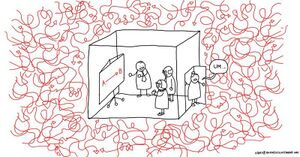 One of the key principle of naturalised sense-making is the fact things exist independently of human perception, in particular things can be known (which is not the same thing as I can know) independently of that perception. Our perception is not necessarily aligned with reality, or for that matter the epistemological understanding of the system. We can see things in different ways and we can experience uncertainty with radically differing levels of confidence. Cynefin can be represented in many ways to make sense of different aspects of human activity and perception, but at its heart is the assumption that there is a reality even if we don’t know it.

One of the basic principles of Cynefin is a goal of maximising the alignment between what things are, how we know things and how we perceive them: ontology, epistemology, and phenomenology. The first version of Cynefin was in the field of knowledge management and had strong originating links to Boisot’s I-Space. That was explicitly focused on the nature of knowledge distinguishing between situations where only experts know and those where knowledge is commonly understood and the consequent actions are not in dispute. The Complex domain at that stage focused on informal networks and distributed forms of knowledge and acts of knowing. In chaos, knowledge would always be novel in nature. That in turn built on various versions of the known-knowable unknowable/unimaginable matrix.

An ordered system is one, which has a very high level of constraint, to the point where everything is predictable. The relation between cause and effect is self-evident. Everybody understands it. Everybody buys into it. That’s the domain of best practice. We sense, we categorize, respond. We have rigid constraints. The point about the Cynefin framework is to say that human beings have learned, for example, in traffic management or operating theaters, to create highly predictable Newtonian systems. There’s nothing wrong with them provided we don’t think they’re universal. In a complicated system for experts cause and effect relations may be obvious but for the decision-maker it isn’t. It’s not self-evident, so you have to carry out some sort of investigation, bring in expertise. You effectively sense, analyze, respond, but there is a right answer and it can be discovered. You may discover the answer within range of possibility. It may not have to be precise, which is why we talk about that as the domain of good practice, not best practice. A complicated system is the sum of its parts. You can solve problems by breaking things down and solving them separately. In a complex system on the other hand, everything is somehow or other connected with everything else, but the connections aren’t fully known. The only way to understand it is to probe it, to experiment in it. But critically you have to experiment in parallel. In Cynefin you construct a safe-to-fail micro experiment around each coherent hypothesis. You run them in parallel, that changes the dynamics of the space, and then the solution starts to emerge. Complex systems can be embedded in complicated systems. We are dealing with complex ideation patterns and until those change no better outcome is possible. The immediate future may be clear, but then it becomes more ambiguous; holding and celebrating that ambiguity is key to resilience Chaos and catastrophe by their definition don’t repeat. Chaos is the absence of effective constraint.

With SenseMaker® we can create landscapes of plausible descriptive patterns. Within those landscapes we can see which tropes have the lowest energy cost of replication, if we are not happy then we first have to change the dispositional state of the system so that a desirable trope or emergent pattern will replicate at lower cost than the negative trope we are unhappy with. Shift the ecology so good things happen in a sustainable way.

Any training material, posters and like with links to where they can be acquired

Retrieved from ‘https://cynefin.io/index.php?title=Causality&oldid=5472’
Cookies help us deliver our services. By using our services, you agree to our use of cookies.