ASHEN is a framework than can be used as a method in the context of knowledge mapping in an organization. It's purpose is to ask meaningful questions in a meaningful context previously created, because ASHEN needs to be deployed complementary to other methods, such as Dependency matrix or Decision Mapping. The purpose of these questions is to help the formulation of implicit or tacit knowledge, so that it can be codified.

“ASHEN helps create a key shift in organizational thinking from key-person dependency to knowledge dependency. This essential step of depersonalization is critical to effective knowledge practice. It is the shift from Only Linda can do X to X requires this combination of artifacts, skills, heuristics, experience and natural talent and, at the moment, only Linda has them. The former statement has only crude solutions, the latter permits greater sophistication and the potential of lasting solutions and sustainable management action. It achieves this by using language that describes the situation at the right level of granularity to permit action without excessive analysis.”

The rich outputs of ASHEN as a method can both be used for direct management action or as inputs to other methods. Direct use helps to identify knowledge, considered assets, in situations in which retention exists. Such situations are common because, as the first Principles for managing knowledge states it: "Knowledge can only be volunteered it cannot be conscripted". Methods that use ASHEN's outputs include Dependency matrix and Exaptive triggers. ASHEN is also part of the Knowledge mapping assemblage.

“Instead of saying What will we do if X leaves the organisation we can instead say How do we replace the combination of artefacts, skills, heuristics, experience and natural talent that X brought to the organisation. [...] One of the other uses of ASHEN in knowledge mapping was to challenge the idea that all of the knowledge could be codified.”

ASHEN was invented by Dave Snowden, "in one angry workshop in Basel" during his IBM days. Among the purposes were to change the attitude towards knowledge retention and improving awareness over the limits of knowledge codification.

ASHEN as a framework

As a common sense linguistic framework, ASHEN is composed of five perspectives or "questions", which help looking at knowledge from five different angles. As such, it is also a typology.

The ASHEN acronym stands for:

ASHEN as a method

The reasons for mapping knowledge can be multiple. In essence, it comes down to uncover non-codified and tacit knowledge in an organization, so that it can be used because:

It could also have a wider use in understanding leadership. It is a tool that can be used to unfold human knowledge and our acts of knowing.

ASHEN helps us think differently and support a new way of talking about a given problem or a situation. On one side, its purpose is to reframe the understanding of knowledge retention, thus allowing "a better sense of the level of vulnerability to loss". On the other side, its use in knowledge mapping brings awareness about the limitations of knowledge codification.

As a method for eliciting knowledge, ASHEN offers to ask five perspective questions. However, coherently with knowledge management principles, it proceeds from the key realization that simply asking someone what they know is "a meaningless question in a meaningless context". A more meaningful question would be: “When you made that decision, what knowledge did you use?”. Therefore, in order to create the necessary preconditions for the method to work, the ASHEN perspective questions need to be contextualized.

The way ASHEN questions are contextualized by referring them on previously mapped real or fictional situations, also referred to as Knowledge disclosure points (KDP). These can be:

These are points in which part of the knowledge is identified. KDP's are usually identified or generated, and clustered, in advance, by applying other methods, such as Decision mapping, Future backwards, or Anecdote circles.

ASHEN provides a contextually rich way of collecting perspective that informs the interviewers of the knowledge assets within the organisation and increases the cognitive load on the respondent so they dig deeper into their memories.

The output of ASHEN comes in two main forms:

As a general principle, the more you are dependent on artifacts and skills the less you have to worry about knowledge retention, the more it is experience and natural talent the more you need to be concerned. This is why bringning awareness and unfolding on what knowledge is based on is important, so that appropriate measures can be taken.

Facilitators should be familiar with the principles for managing knowledge and with those of complex facilitation.

No prior knowledge is needed of participants, except... their own knowledge. 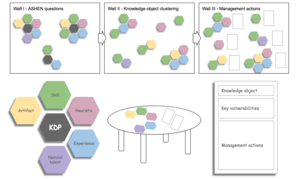 A list of mapped KDP's (decisions, anecdotes, etc.) constitutes the main input of the method.

The ideal setting for ASHEN is a standup environment.

The workflow for the ASHEN method is a three-stage emergence process.

The method can be run virtually, using virtual collaboration tools.

This material will be extracted for the method cards

Back of card summary

How can it be used?

Other related methods and approaches

Retrieved from ‘https://cynefin.io/index.php?title=ASHEN&oldid=4933’
Categories:
Cookies help us deliver our services. By using our services, you agree to our use of cookies.